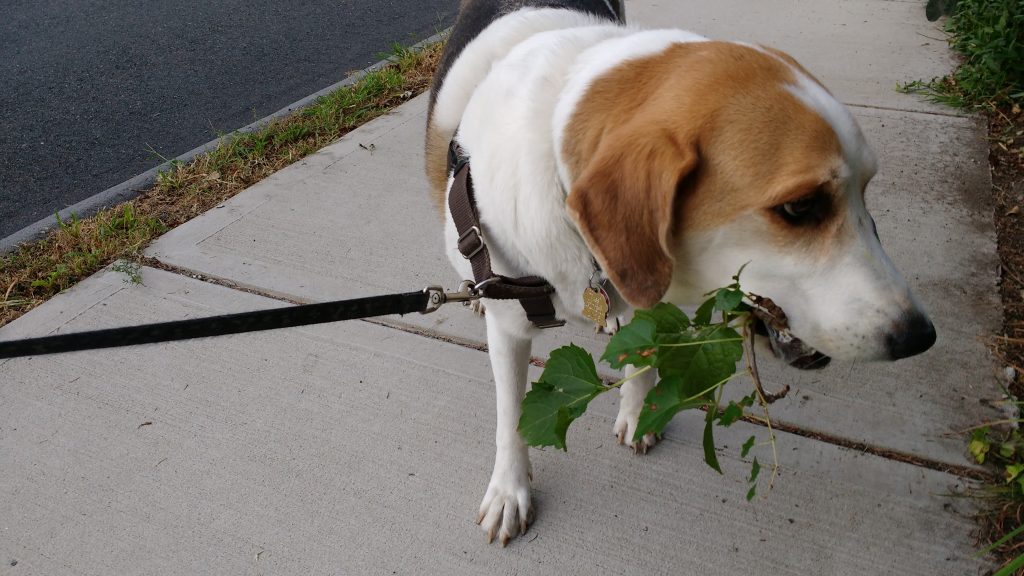 She was a rescue, our Gypsy, and despite more than three years of eating really well, she still searches for food wherever we go.  Usually when we’re out on our early morning walk. I’m looking ahead to see what goodies might be there. “Leave it” is not a command she seems likely to master–ever. However, as the week drags on I tend to be sleepier on our  jaunts and more likely to miss smelly sidewalk morsels.

Yesterday along the road with shops and fast food places, the route that usually has the best pickings, there were no prospects. At all. Not one doughnut crumb, French fry, or blue jay wing. As we headed onto the more residential streets I relaxed. We were days past trash day when chicken bones abound, extracted from trash bags by the neighborhood raccoons. Surely there wouldn’t be anything for her to find.

Suddenly, Gypsy pounced, head disappearing entirely into a hedge. She came out with a branch sticking out of one side of her mouth and a Ziplock bag with half a sandwich in the other. Half a sandwich. In a Ziplock bag. In the middle of a bush. That’s some nose!

She carried that thing home double time hoping to get a chance to scarf it down when I wasn’t paying attention, but in the end, thwarted by my unwillingness to stop and let her eat it, she dropped it on the stair landing and went off in search of water.

Today’s walk was different. She scored treats from two gas station attendants simply by walking by. Then, as we were nearing home and I was preparing to warn her off a garbage bag of corn husks the squirrels had gotten into, one of the scamps tried to bean her with a corn cob from the tree above. No harm, no foul for Gypsy. She carried that sucker all the way home.

The squirrel must have known it’s #NationalDogDay.

This site uses Akismet to reduce spam. Learn how your comment data is processed.